The state we’re in: is there an opioid crisis?

The opioid crisis is often spoken about in the USA, but are there similar overprescribing issues in the UK?

As a nation, we are in a great deal of pain. Both physical and emotional pain lead us to seek relief and in our desperation to ease this pain we may look beyond the GP surgery. Statistics show that the UK has the largest reported opioid-using population in Europe. This is reflected in the rise of prescribed pain medication and also in the rise of opioids sourced on the street. 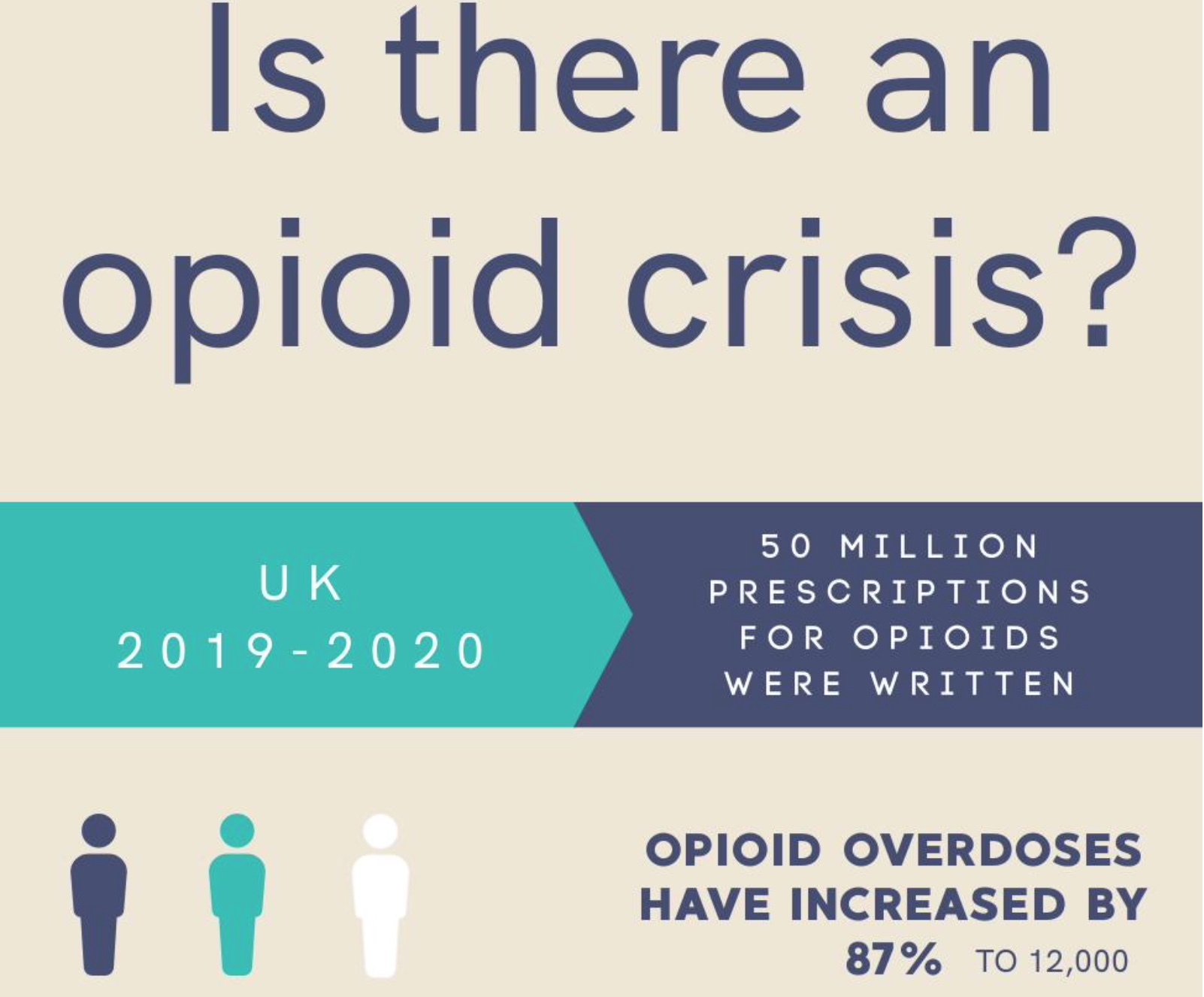 The pain experienced by our nation has led to a dramatic rise in opioid dependency, overdose and death. Last year, (2019-2020) in the UK:

In the USA, the harm-related opioid statistics are proportionally far worse and in 2018, the Opioid Crisis Response Act was passed by the US senate in an attempt to tackle their spiralling opioid predicament. Programmes were funded and agencies mobilised with a funding pot of $7.9 billion.

Often referred to as the ‘opioid-sparing effect,’ the use of cannabis in conjunction with opioids has been found to provide effective pain relief alongside reduced opioid consumption. Studies indicate that this occurs primarily due to a synergy in the analgesic effects between opioids and cannabinoids. With the reduction of the opioid dose comes the lowering of the physical dependency. A recent study exploring the link between states with operational dispensaries and opioid usage within those states, indicated that in states where cannabis is legal, there is a significant decrease in opioid prescribing, opioid overdose and mortality rates.

So let us head back across the pond to the UK and consider the steps that are being taken to address our opioid crisis. Although medicinal cannabis can be legally prescribed for chronic pain conditions, it is currently not yet openly prescribed to support patients with specific opioid dependency although these patients may be the very ones to present with chronic pain or depression and anxiety.

Over the past few years, NICE (The National Institute for Health Care and Excellence) has been working on new guidelines for the assessment and management of chronic pain. They highlight a particular group of patients with chronic primary pain defined as those having ‘pain with no cause’ stating that there is little or no evidence that treating such conditions with painkillers makes any difference to quality of life, pain or psychological distress.

Interestingly, many patients experiencing chronic pain, be it primary (pain with no cause) or secondary (pain caused by an underlying health condition) report that, over time, opioid analgesics cause the feeling of pain to increase. There is evidence to suggest that if you take opioid medication for four weeks or longer it makes us more sensitive to pain -leading to its increase- known as opioid-induced hyperalgesia. This is because opioids provide relief by blocking pain but the body increases the number of pain receptors to allow the pain signal to return. Opioid use also reduces the body’s ability to create and use natural endorphins meaning that the body’s natural response to pain is disarmed. If we then look at how opioids also mask emotional pain and trauma, a reduction in opioids can lead to amplified physical and emotional pain.

Could cannabis be a support to those who are considering reducing their opioid intake? There is much evidence to indicate that this is indeed the case, but accessing medicinal cannabis in the UK, currently,  for this specific need may prove to be difficult.  Reducing opioid use comes with many warnings and withdrawal symptoms can be challenging and sometimes dangerous to manage, especially if someone is attempting to do this without support. We hear of stories detailing how people have begun to consume cannabis and have, naturally and slowly, reduced their intake of opioids to a point where their dose is so low that they have been able to take the final step of freeing themselves from their opioid consumption.

With this new approach to opioid prescribing from NICE, it becomes more clear that there is potential to develop an opiate withdrawal programme in conjunction with cannabis -but is this something that would ever be considered by the cannabis clinics in the UK or even by NICE?

There are many success stories detailing how cannabis has helped many to reduce, then end their opioid use enabling them to lead fuller lives. Carly Barton is one of these. Her experiences and her story continues to give hope to those who are at the mercy of prescription or street-sourced opioids. There is a light and, following on from this article, we will share Carly’s guide to opioid withdrawal.